On Friday the 18th of October, trading on the euro closed up. The bullish phase started in the European session and continued throughout the rest of the day. The euro rose on the back of a broadly weaker dollar, which was put under pressure by the UK’s EU withdrawal agreement. The EURUSD pair rose to 1.1172 without any corrections. 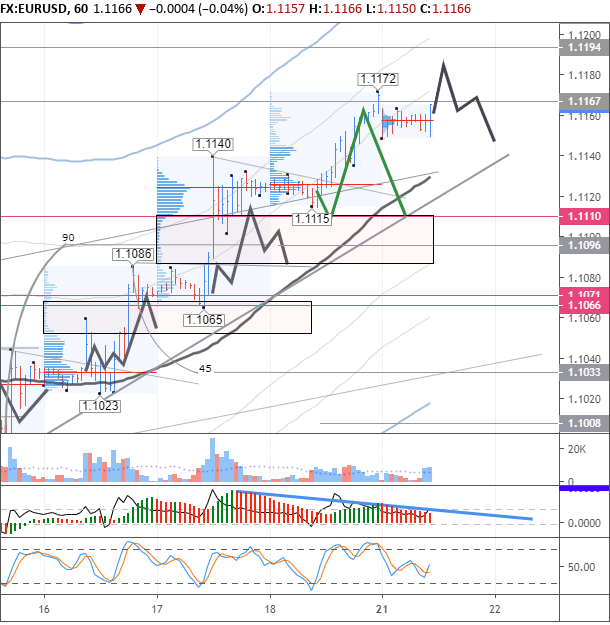 Friday’s expectations were met. Geopolitical developments are maintaining the pair’s bullish trend. Having reached fresh highs, a correction was expected. This correction has begun, although the pair is now trading sideways.


On Saturday the 19th of October, the British parliament passed an amendment forcing Prime Minister Boris Johnson to seek an extension to Brexit. The UK’s exit from the EU drags on. Nevertheless, this is good for the pound. The European Parliament will most likely hold a vote to ratify the Brexit agreement today.

The FOMC has a meeting on the 30th of October. US economic data is mixed. Vice Chair of the Federal Reserve Richard Clarida said on Friday that the US economy is in good shape, although there are still some evident risks to keep an eye on. According to CME’s FedWatch Tool, there’s an 84% chance of an interest rate reduction. The euro has a week to hit fresh highs and break through the weekly trend line projected from 1.2350.

We’re expecting fresh highs today followed by a rebound to the LB. The pair is currently trading around the trend line, so it will be interesting to see how big the rebound is in order to better understand the bulls’ intentions. There was growth on Friday, so today we should have predicted a Monday v Friday scenario. However, due to the geopolitical situation and the euro crosses, we expect a correction to take place only after hitting fresh highs.

Financial News Forex and Currency News
← The Analytical Overview of the Main Currency Pairs on 2019.10.21
Pound weakness mitigated by prospects of yet another Brexit “meaningful” vote →
Featured Articles: