The U.S. could “drown the world in oil” over the next decade, which, according to Global Witness, would “spell disaster” for the world’s attempts to address climate change.

The U.S. is set to account for 61 percent of all new oil and gas production over the next decade. A recent report from this organization says that to avoid the worst effects of climate change, “we can’t afford to drill up any oil and gas from new fields anywhere in the world.” This, of course, would quickly cause a global deficit, as the world continues to consume around 100 million barrels per day (bpd) of oil.

Global Witness notes that the industry is not slowing down in the United States, notwithstanding recent spending cuts by independent and financially-strapped oil and gas firms. If anything, the consolidation in the Permian and other shale basins, increasingly led by the oil majors, ensures that drilling will continue at a steady pace for years to come.

It isn’t as if the rest of the world is slowing down either. The global oil industry is set to greenlight $123 billion worth of new offshore oil projects this year, nearly double the $69 billion that moved forward last year, according to Rystad Energy. In fact, while shale drilling has slowed a bit over the past year amid investor skepticism and poor financial returns, offshore projects have begun to pick up pace.


But that trend might turn out to be just a blip. The U.S. is still expected to account of the bulk of new drilling and the vast majority of new production, with much of that coming from shale. Already, the U.S. is the world’s largest producer of both oil and natural gas. And the pace has accelerated in recent years. In 2018, U.S. oil and gas production increased by 16 and 12 percent, respectively. According to the EIA, the U.S. surpassed Russia in terms of gas production in 2011, claiming the top spot, and it surpassed Saudi Arabia in oil production last year. 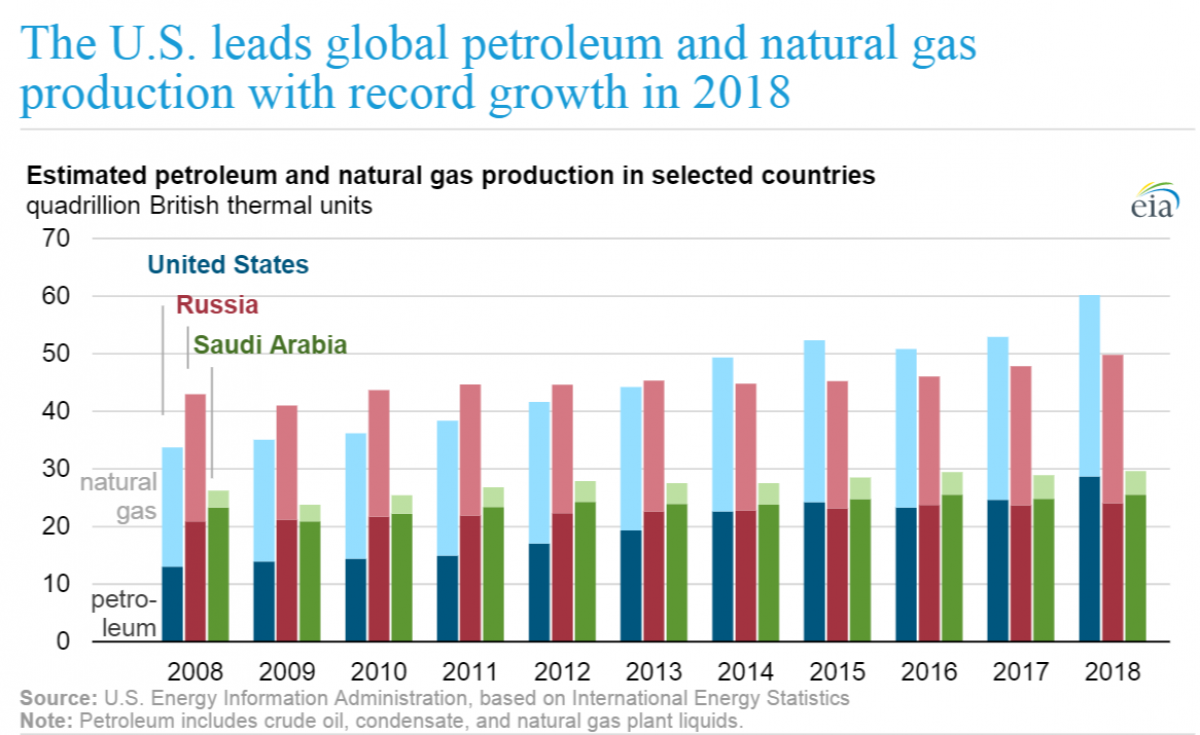 Going forward, new production from the U.S. will be eight times larger than the next largest source of growth, which is Canada. In fact, the U.S. will add 1.5 times more oil and gas than the rest of the world combined, according to Global Witness.

But because so much drilling in the U.S. is concentrated in a few areas, individual U.S. states on their own tower over the rest of the world. If Texas were a country, it would account for the most new oil and gas production in the world. Between 2020 and 2029, Texas could account for 28 percent of all additional output, Global Witness says.

Canada and Pennsylvania tie for second and third with 7 percent each. Then comes New Mexico at 5 percent of the growth and North Dakota at 4 percent. Oklahoma, Brazil, Colorado, Russia and Ohio are all tied at 3 percent a piece.

In other words, 7 out of the top 10 sources of new oil and gas production globally over the next decade are U.S. states.

“If things don’t change, by the end of the next decade, new oil and gas fields in the US will produce more than twice what Saudi Arabia produces today,” Global Witness said in its report.

This presents a massive challenge. “To avoid the worst impacts of climate change, our analysis shows that global oil and gas production needs to drop by 40% over the next decade. Yet, instead of declining, US oil and gas output is set to rise by 25% over this time, fueled by expansion in new fields,” the report warned.

By Nick Cunningham of Oilprice.com