Company’s Share Price Takes a Hit, and This Investor Wonders Why

The market sold off on news from this junior miner operating in British Columbia’s Golden Triangle, and Peter Epstein of Epstein Research questions the logic.

Aben Resources Ltd. (ABN:TSX.V; ABNAF:OTCQB) recently announced results from the first shipment of drill core from its 2019 drill program at the Forrest Kerr gold project in the Golden Triangle (GT) of British Columbia, Canada. Results from three of ten completed drill holes were reported. Nothing too exciting in the assays, the best intercept was 61.7 meters of 0.46 g/t gold (August corp. presentation). 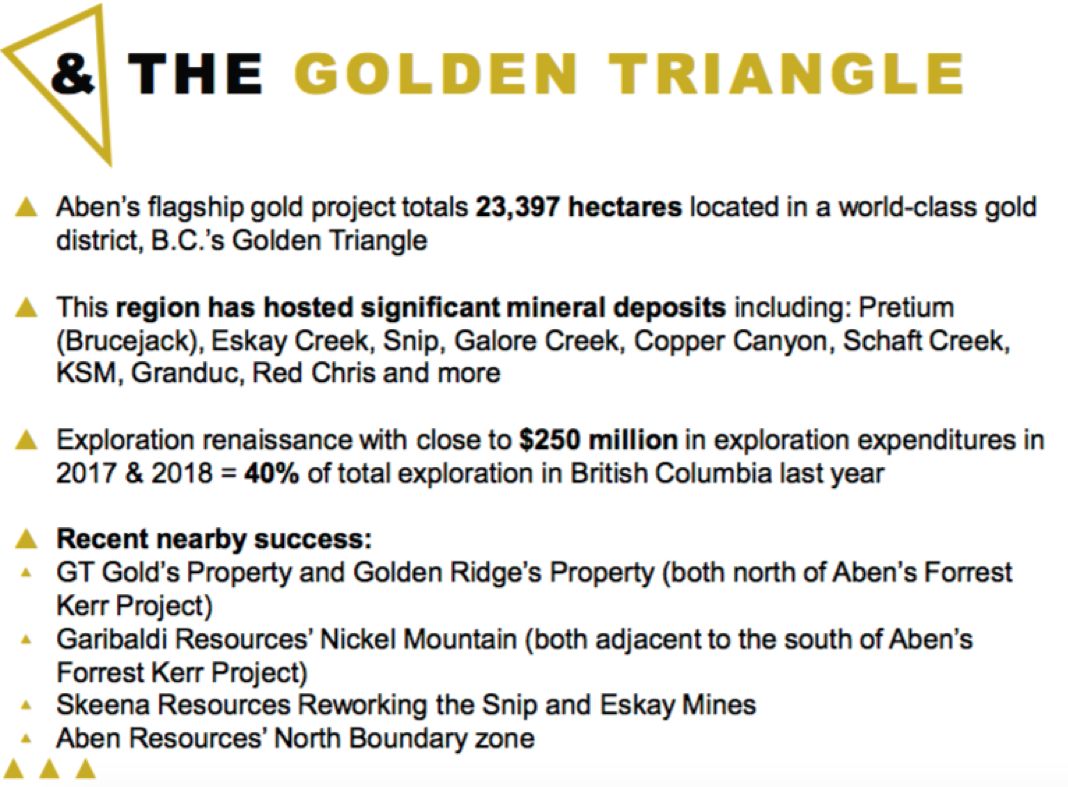 
The market spoke, and it spoke loudly. The press release was not well received. But why such a negative response? Shares plummeted to $0.135, down 27%, before ending Wednesday at $0.155, and dropping a penny on Thursday to $0.145.

Trading volume of 3 million shares was the heaviest of the year. I would have expected something like this if the company was out of cash, with no more results pending.

But that’s simply not the case, Aben remains well funded. Eric Sprott is the largest shareholder. (Note: In the remainder of this piece I suggest that Aben’s share price [could, might, possibly, potentially] rebound from $0.145. However, I don’t know when or if this will happen, or how much of a rebound is likely.)

First and foremost, we need to see one or more strong drill holes reported in September, October or November. This remains quite possible because the zones being drilled are still open along strike and at depth.

All drill holes are important in understanding the geology, to better target zones of mineralization. The GT is known to have complex geology, as is the case with a lot of deposits in the district. Even assays that are not that exciting help explain geology and structure, improving Aben’s chances of success.

What if there’s nothing left to find?

Management believes there’s likely to be more high-grade gold on the property. Gold zones identified so far came from a powerful mineralizing event. The team is up in the GT this week planning the next batch of drill holes, and they remain optimistic for the remainder of this season.

Management pointed out that last year’s blockbuster hole FK18-10 (multiple high-grade zones, including 62.4 g/t gold over 6 meters within 38.7 g/t gold over 10 meters) was targeted based on a high-grade surface sample. Aben has several new target areas supported by high-grade surface showings that will be drilled over the next several weeks. Strong intercepts from any of these new areas would be deemed a new discovery.

A lot of angst, disgruntlement and fear over just three assays?!?

Along with a few disappointing drill holes was the arguably more important news that management is doubling down on its drill program. Aben is expanding the budget and intends to continue drilling into September. The team is drilling another 1214 holes at Forrest Kerr and should end the season with about $2 million in the bank.

The company’s share price is down 70% from its 52-week high. That’s the worst decline among the top 20 GT juniors. Is the considerable share price weakness justified?

While the press release was not great, it wasn’t all bad either. . .

The following are two streamlined quotes from the press release that describe the drill program at Forrest Kerr. There’s a fair amount of technical data in the press release for readers interested in that. I’m keeping it simple in this article:

“The goal of this year’s drill program is to test a specific area of the North Boundary Zone and the area around the historic ‘Noranda hole’ and a corresponding new zone south of the Noranda hole. These three assays are from widely spaced holes, peripheral to the main zone of mineralization. Each encountered variable and intermittent polymetallic mineralization.”

Obviously, the goal of this year’s drill program has not been defeated by the first three drill holes! In fact, the team believes the goal is alive and well, thus a more than doubling of the number of holes from 10 (completed) to a total of up to 24. Presumably, management would not do this unless they had good reasons:

“Mineralization corresponds to multiple and widespread fault and shear zone structures. The mineralized structures correlate very well with magnetic highs delineated by an airborne survey flown in May 2019. Drilling on this part of Forrest Kerr has only tested a small portion of the potentially mineralized structures defined by the magnetic survey.” 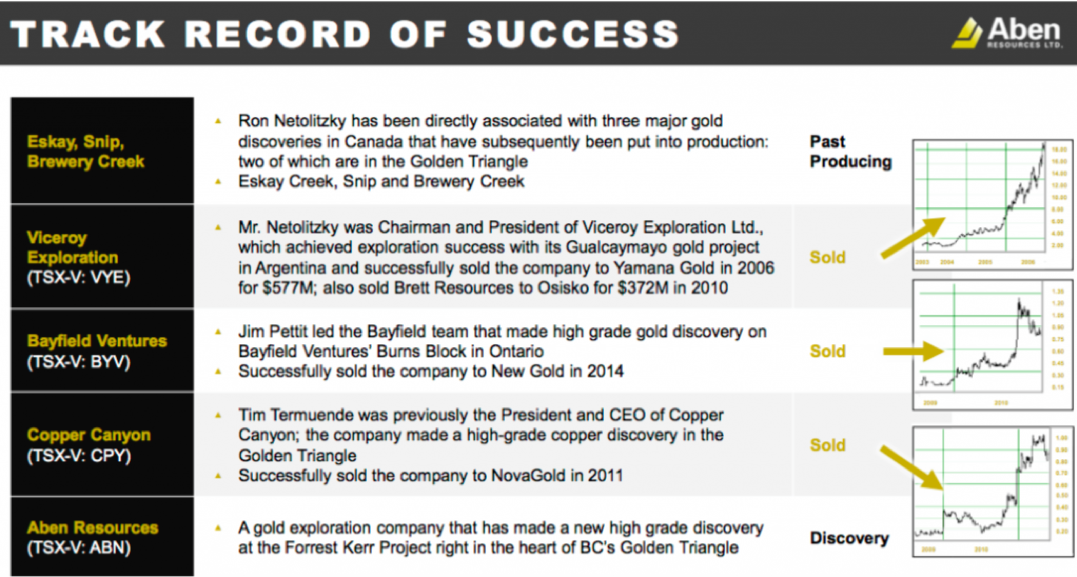 Only a small portion of potentially mineralized structures defined by a magnetic survey have been tested. Again, the goal remains intact: to drill test very specific zones with potential for high-grade mineralization.

Gold price up nearly US$300/ounce since this time last year!

Readers should not forget the critical importance of today’s gold price of approximately CA$2,000/ounce. In U.S. dollars, gold is at a 64-month high!

Last year, Golden Triangle juniors were working with a US$1,200$1,250/ounce gold price backdrop. Anything above US$1,400/oz. is awesome in my opinion. Last year’s lower gold price did not prevent some spectacular gains from select GT players. For example, who can forget GT Gold Corp. (GTT:TSX.V)?

I never wrote about GT Gold, or invested in it, so I’m not biased or tooting my own horn by mentioning it. Yet, GT Gold actually sold off on mediocre drill results in mid-August 2018, from $0.74 to $0.43 (down 42%!) in just eight days. Two months later, strong assays sent shares soaring above $2. 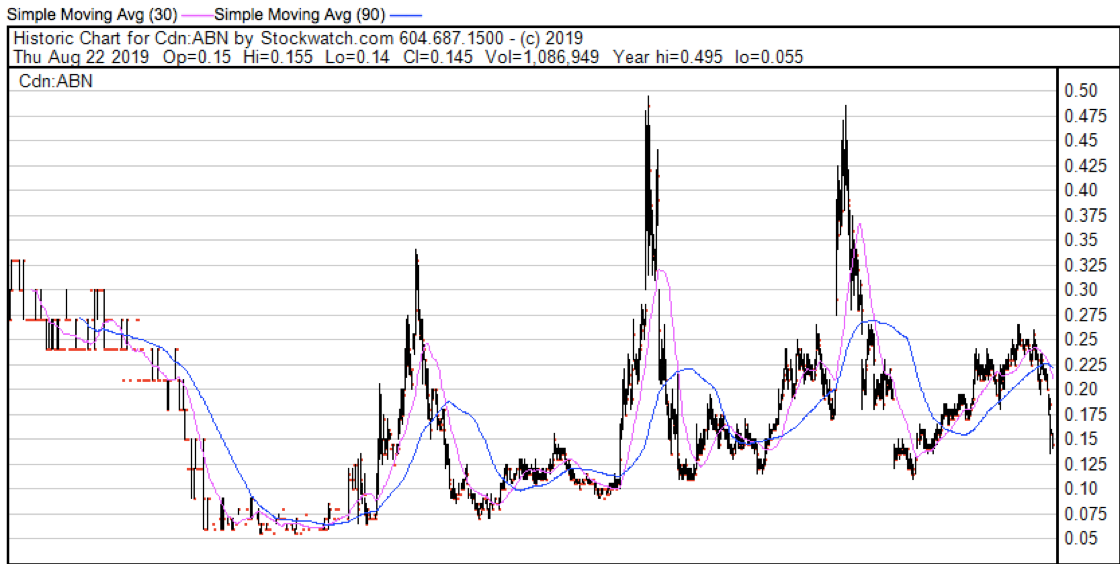 The five-year stock chart of Aben Resources suggests a real possibility of a large move if we get strong drill results. Don’t read too much into this chart. I’m not an adherent of technical analysis.

On the same day, the gold price was $1,207/ounce versus the Aug. 20, 2019 price of $1,507/ounce. By no means does this predict anything, it only leads me to believe that there’s a decent chance of a significant move in the share price if, and only if, one or more drill holes hit high-grade mineralization. 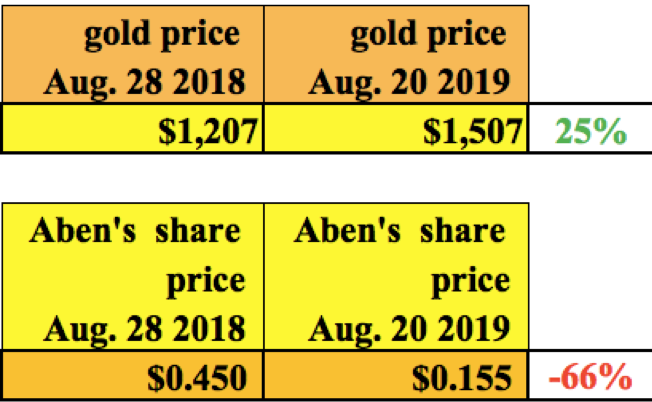 Aben Resources is the 13th largest Golden Triangle junior (EVs ranging from a few million up to GGI’s $182 million). Based on just a few drill holes, investors traded three million shares on Aug. 20, sending the share price significantly lower, seemingly concluding that nothing good could possibly come from the remaining (roughly) 20 assays.

No one knows what the future holds for Aben, but selling shares now, with over 85% of total assays pending, seems like a knee-jerk reaction. Anyone holding shares for many months up until now, why sell in August??? Could shares go lower? Yes, absolutely.

However, for GT players, August-September-October is when big moves in share prices often occur (if they occur at all). That’s the whole point of owning shares in these critical months! It’s happened twice before for Aben; will it happen again this year?

Disclosures: The content of this article is for information only. Readers fully understand and agree that nothing contained herein, written by Peter Epstein of Epstein Research [ER], (together, [ER]) about Aben Resources, including but not limited to, commentary, opinions, views, assumptions, reported facts, calculations, etc. is not to be considered implicit or explicit investment advice. Nothing contained herein is a recommendation or solicitation to buy or sell any security. [ER] is not responsible under any circumstances for investment actions taken by the reader. [ER] has never been, and is not currently, a registered or licensed financial advisor or broker/dealer, investment advisor, stockbroker, trader, money manager, compliance or legal officer, and does not perform market making activities. [ER] is not directly employed by any company, group, organization, party or person. The shares of Aben Resources are highly speculative, not suitable for all investors. Readers understand and agree that investments in small cap stocks can result in a 100% loss of invested funds. It is assumed and agreed upon by readers that they will consult with their own licensed or registered financial advisors before making any investment decisions.

At the time this interview was posted, Peter Epstein owned no shares of Aben Resources, and the Company was an advertiser on [ER].

Readers understand and agree that they must conduct their own due diligence above and beyond reading this article. While the author believes he’s diligent in screening out companies that, for any reasons whatsoever, are unattractive investment opportunities, he cannot guarantee that his efforts will (or have been) successful. [ER] is not responsible for any perceived, or actual, errors including, but not limited to, commentary, opinions, views, assumptions, reported facts & financial calculations, or for the completeness of this article or future content. [ER] is not expected or required to subsequently follow or cover events & news, or write about any particular company or topic. [ER] is not an expert in any company, industry sector or investment topic.