Storm Clouds on the Horizon

I have had more than a few emails asking me what I think of the current set-up for stocks, bonds, currencies and gold since everything began to re-inflate a few days ago and without going off on a literary tangent, it is obvious that the banks are absolutely freaking out over the declining high-end real estate numbers coming in from not only the money centers but also the fringe regions. Mortgages, the bulk of the loan portfolios for the global banking industry, are only as sound as the collateral upon which they are hypothecated (secured) and if you go back to the sub-prime crisis of 2008, the big revenue drivers for the banks were the sheer volume of homes being financed. Like every masterfully run Ponzi, the Greater Fool Theory is allowed to sustain itself only as long as the banks and the regulators all agree that there are “no limits” and with that, “no rules.”

It was 2003 that the U.S. real estate market was experiencing a modest correction and no one was particularly worried about it because they had years and years of payments into their houses and “SO WHAT?” if the market was going sideways. However, the bankers, so astute at managing leverage, had earlier decided that it was time to reduce the margin requirement so while you and I could care less about a 5% drop in the “median house price,” if you were a Goldman banker or a Merrill banker or a JPM banker that was operating at 30:1 leverage ratio, that 5% drop put you out of business. Which, as we all know, did occur and indeed DID put the banks technically “out of business” until Helicopter Ben rode in and along with the U.S. Congress, allowed the banks to not only survive, but actually issue bonuses to the in-house criminals in the same year in which the public taxpayer bailed them out!

This chart showing housing prices since 1965 really does show us all the frailty of central bank analysis and why, in the final analysis, citizens have no real chance to benefit from their input. I am of the belief that those that control of the public purse, which includes the treasury and the central bank, should be ELECTED, as opposed to APPOINTED.

In the days of yore when the ELECTED officials were in charge of everything EXCEPT money, people voted for nominees that had integrity, intensity, and “snarl.” Today, with the fading of the we Boomers (that enslaved our offspring with unimaginable debt), the youth of today have taken our lead and decided that being in debt is just part of managing life. Well, I can tell you that those that believed that in the Roaring Twenties got a rude awakening in the Dirty Thirties. The bankers liquidated anything and everything that was “chattel” in order to make sure that the bank survived.

That we have gone beyond that is understatement; our banking system today is nothing but an arachnidan web of self interest and elitism. When Canada was founded in 1867, the “elitists” were farmers whose average yield per acre was in excess of what the rest of the world boasted. The company that funded most things in the years after Canadian Confederation was Massey-Harris (later Massey-Ferguson) because the main item of CAPEX was equipment required to plant and harvest the enormous Prairie crops with a close second being forestry. There was never a need for financial engineering because central banks could not influence the weather patterns that governed yield and the associated CAPEX. There were years when farmers flourished and there were years when floods or drought brought in bankruptcy but there were NEVER years where the farmer’s lobby was before Parliament or Congress on bended knee begging for a bailout. They managed risk on their own with nary a sniff of the moral hazard permeating the 2019 landscape today.

Last Christmas Eve, I looked at the RSI for the S&P 500 at around 18 and told the world that probabilities would dictate a solidly robust 2019 for the S&P but little did I see the Fed pivot coming where they went from “hawkish” to “dovish” without even a thirty-second interlude for “neutral.” As I look back, I think it was the October downgrade of the GE paper and the ensuing 21-day freeze-up in bond issuances that evoked tremors of 2008 and thus triggered the massive turn in policy. Stocks picked up on it immediately and instead of heading south for the New Year, one of the biggest rallies of all time was unleashed and “Happy Days” were once again visiting the corner of Broad and Wall, party horns blaring and CNBC anchors cheering. 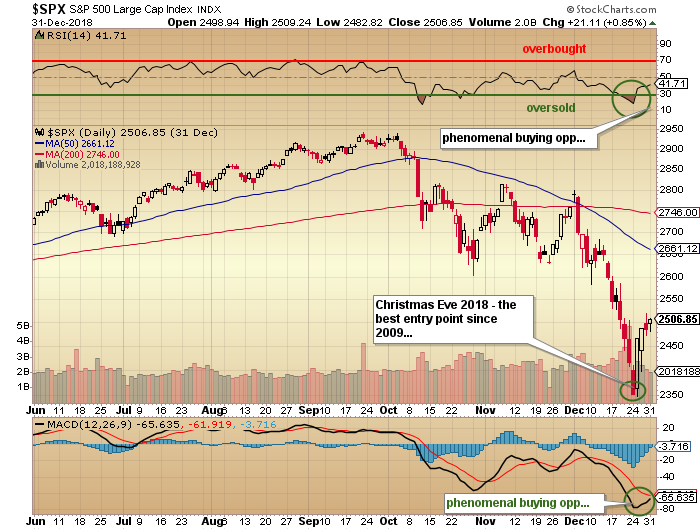 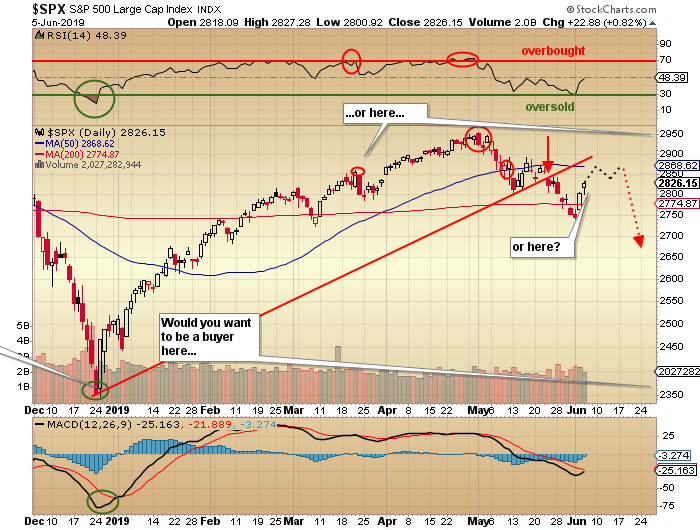 However, there is one thing that the stockroaches failed to remember a month ago at the new all-time high of 2,954.13, the one thing that the Fed cannot change is the one looming threat to not only stocks but to the living standards and societal integrity so “entitled” to the New Generation and that is the word “D-E-B-T.” At a figure north of $22 trillion, it is an unsustainable number and cannot continue. At the same time, it is a number SO very large that it cannot be reduced. The only solution is to try to maintain its ascent while reflating upward the GDP numbers by way of massive money creation (or so they think) but we all know that the impact of $1 of credit creation in 1990 increased GDP by a factor of around 15 times what $1 does here in 2019. The money-printing elixir is now virtually impotent in seeding real organic growth but what other avenues to the central banks have? None. And that is why gold and silver remain the safest assets to hold in an era where the authorities are trying desperately, through propaganda, interventions, and regulatory dismissal, to diminish the public’s attitudes and behaviors toward them. 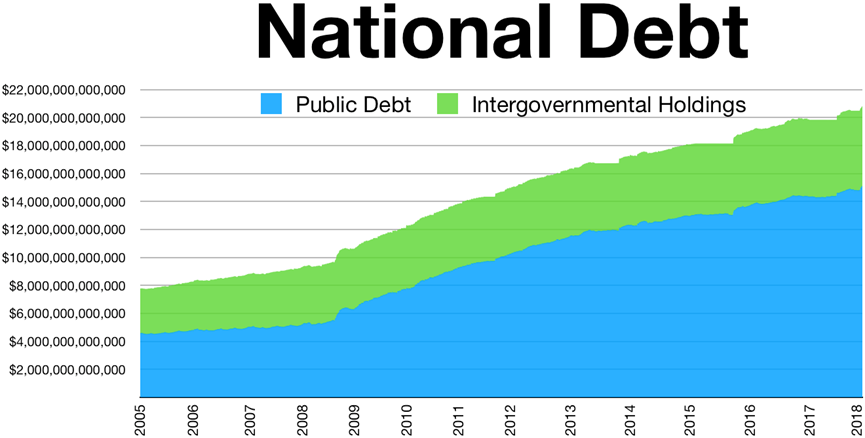 It is with one look at the National Debt chart that I stubbornly refuse to participate in the 2019 stock market rally. I see far too much risk. Where I sit today is that I am flat all call options on the metals and miners and hold only a 25% position in NUGT (Direxion Daily Gold Miners Bull 3X Shares), having taken profits earlier this week with the last tranche of the JNUG (Direxion Daily Junior Gold Miners Bull 3X Shares) going out at $9.15. Average sale prices were around $8.80 adding another 25% return to the portfolio. NUGT will generate about the same and that is pretty darn good considering I was underwater on both JNUG and NUGT on May 25. Amazing how fast they turn

I have Goldman Sachs once again on the radar after covering at around $181 with a sale of the July $180 puts at $6.60, which was a triple but on a relatively small allocation. Had I allocated the same in that trade as I had in the Miner ETFs, it would be “Pop the Cork” time and I could head out on a world tour and take the rest of 2019 off. However, I didn’t and therefore I can’t so here I stay, chained to the desk, destined to churn out profitable trades so that angry wolf is unable to enter the house. The junior explorcos continue to be ignored but I am urging everyone to keep a close watch on Getchell Gold Corp. (GTCH:CSE) whose program has been completed with assays pending. As the company reported back in January, it intended to drill to a maximum depth of 3,400 feet through an enormous 1 km3 resistivity anomaly and if that zone is mineralized, the response is going to be substantial. We should find out in about three weeks so at $0.20, it is a pretty cheap call on what could be a brand-new Nevada discovery.

Michael Ballanger Disclaimer:
This letter makes no guarantee or warranty on the accuracy or completeness of the data provided. Nothing contained herein is intended or shall be deemed to be investment advice, implied or otherwise. This letter represents my views and replicates trades that I am making but nothing more than that. Always consult your registered advisor to assist you with your investments. I accept no liability for any loss arising from the use of the data contained on this letter. Options and junior mining stocks contain a high level of risk that may result in the loss of part or all invested capital and therefore are suitable for experienced and professional investors and traders only. One should be familiar with the risks involved in junior mining and options trading and we recommend consulting a financial adviser if you feel you do not understand the risks involved.

Metals Opinions
← EURUSD: expect a test of 1.1300 with a subsequent bounce to 1.1350
USD Mixed Amid A Quiet Session →
Featured Articles: