Gold Price Forecast 2020: How the Presidential Election Could Affect the Gold Market

The 2020 presidential election is already shaping up to be one of the most bitterly contested in history. The outcome could have enormous ramifications for all asset markets, including precious metals.

In the meantime, a lot can happen before November 2020 – especially with the Federal Reserve apparently set to turn dovish and cut interest rates this summer. 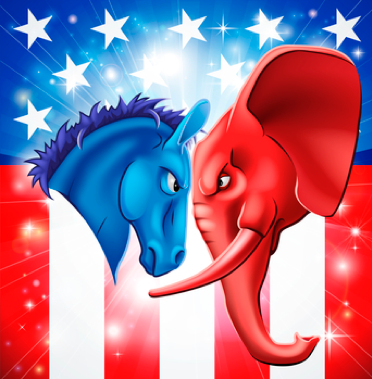 Some historical research into presidential election cycles suggests that the stock market tends to perform well heading into an election year. The incumbent administration tends to focus on padding economic statistics.
And during election years, Fed officials (who swear up and down they aren’t motivated by politics) tend to avoid making policy moves (such as rate hikes) that could make them vulnerable to political attacks.

Gold and silver, which are less tied to the economy than stocks, show little recent correlation with election years.


The last time a Republican incumbent was up for re-election was 2004. Incumbent President George W. Bush faced off against Democrat challenger John Kerry. Gold and silver markets performed well in the second half of 2003 and made modest gains in 2004. The metals were in the early stages of a major bull market.

In 2008 (when Barack Obama and John McCain were vying for the White House), the financial crisis hit. Silver got slammed along with virtually all other assets during that infamous autumn. Gold, however, weathered the storm quite well and ended up putting in a gain for the year.

The stunning election victory of Donald Trump in 2016 lit a fire under the stock market and put something of a damper on retail demand for physical precious metals in the United States.

Although gold prices are now up since Trump’s election win and inauguration, silver has trended lower – and coin and bar demand remains soft compared to the heady years under President Obama.

Unlike stocks, precious metals tend to benefit from the “fear” trade. If a pro-socialist Democrat actually wins the White House in 2020, you can bet a lot of investors will decide to hunker down and get defensive.

Gold and silver markets may begin to display an inverse correlation to trends in President Trump’s poll numbers.

However, larger macro forces now in motion – namely, steadily rising government debt and accommodative monetary policy – will stay in motion through next year’s election and beyond, regardless of who wins. It’s only a matter of whether the election results accelerate the debt-fueled monetary crisis that is coming.

If the GOP keeps the White House in 2020, it’s not necessarily bad news for metals investors.

Recall that when George W. Bush won re-election in November 2004, gold was trading at a mere $450/oz. The money metal went on to hit a record $1,000/oz in early 2008. Over that same period, silver advanced from under $8/oz to over $20/oz. Importantly, precious metals vastly outperformed the stock market through the four years of Bush II’s second term.

Some in the conservative media stamp Democrats as suffering from “Trump derangement syndrome.” Unhinged hatred of the President is only part of what’s driving Democrats to take increasingly radical positions (packing the Supreme Court, abolishing the electoral college, abolishing ICE, censoring the internet, “Medicare for All,” “Green New Deal,” etc.).

Even before Trump, the base of the Democrat Party had been lurching ideologically to the left. Today Democrat candidates are being pushed to reject “mixed economy” welfare statism and fully embrace socialist doctrines. Nearly the entire field of Democrat presidential candidates has essentially adopted Bernie Sanders’ platform.

One exception: Former Colorado Governor John Hickenlooper, who is running as a pragmatic problem solver with a business background. He recently gave a speech to California Democrats in which he said socialism was the wrong way to go. He was roundly booed.

Meanwhile, 76-year old “Uncle Joe” Biden is disavowing himself to appease far left activists but that is proving to be difficult for him. Under pressure, he suddenly reversed his decades’ long support of the Hyde amendment, which bars federal funding of most abortions.
Biden is also trying to play catch-up to the trillions in new spending programs proposed by Bernie Sanders and Elizabeth Warren, clumsily rolling out a partially plagiarized “Clean Energy Revolution” that would cost the economy at least $5 trillion.

As for Senator “Pocahontas,” Warren has gone off the reservation when it comes to taxing, spending, and printing currency out of thin air. She would pay for her multi-trillion-dollar Progressive wish list by instituting a new wealth tax and pushing the U.S. dollar lower (i.e., inflation). As Warren put it, her monetary policy (vague as it is) would entail “more actively managing our currency value.”

It sounds like Modern Monetary Theory (MMT), which is likely coming in one form or another in the years ahead as the government struggles just to pay interest on an exponentially growing debt load. Under MMT, the government would directly print the dollars it needs to close its deficits rather than issue new bonds. Similar monetary experiments didn’t work out so well in Zimbabwe and Venezuela.

Given President Trump’s repeated clashes with the Federal Reserve over what he sees as “too tight” monetary policy, he might be all too willing to support a bipartisan push for a more “actively managed,” more inflationary monetary system.

Investors who are thinking about selling precious metals, or refraining from buying until Trump leaves office, should check their premises.