Bob Moriarty of 321gold deciphers the forces that affect the cost of silver and describes a company he believes is poised to become mid-tier.

When we first started 321gold back in 2001 I went to a lot of shows and met most of the players in the resource business. Many of the other writers felt there was something special about silver and it was going to go up far more than gold. My response was that it was a commodity and like every other commodity it would go up and it would go down. Actually when the silver speculators get frothy about the mouth and silver makes a top, it falls off a cliff faster than any commodity I have ever seen.

If you tested all resource investors for sanity, those who worship silver are easily the nuttiest. For the best part of 20 or more years the most popular silver “guru” was preaching that silver was the most valuable metal known to mankind. It would be in great shortage if the U.S. ever got into a war and go to $50$100 an ounce while everything else stayed the same. It was so valuable that you should “never, never, never, ever sell” silver.


The fact that he missed every prediction he ever made didn’t seem to bother anyone. We have been in war constantly since 2001. Silver has gone up and silver has gone down just like everything else.

But you can price silver, not in dollars, but against gold. There are times the sentiment for silver gets so out of whack that it’s like buying a winning lottery ticket after the lottery numbers have been pulled. Today is such a time. There is little difference now between buying silver and stealing. The perma-bull and nutty-as-a-fruitcake silver speculators have totally thrown in the towel and have gone off to the greener pastures of bitcoin and weed.

The number of ounces of silver that it takes to buy an ounce of gold is up and down constantly. If you sell silver when the ratio is low, you will almost always make money, and if you buy silver when the ratio is high you will almost always make money. Today the ratio is about 90 ounces of silver to buy one ounce of gold. That’s an extreme of emotion and if you have ever read any of my investment books you will know that’s when to buy and sell, at extremes. 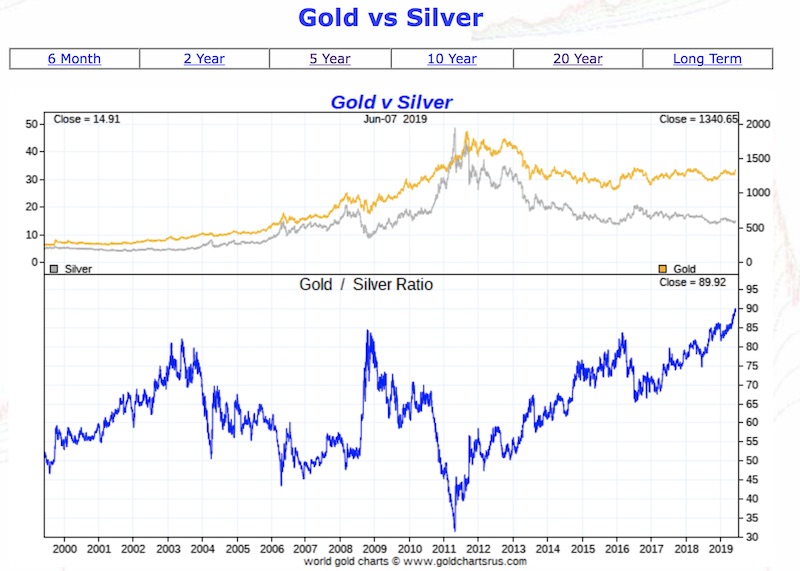 I met Michael Williams in 2002. He’s a Brit, as is my darling wife, and worked for Sterling Mining. That company was run by a total nutter who would tell you everything you wanted to hear but was incapable of wearing shoes where you had to tie the laces. Michael tried for years to help management but they were beyond helping and eventually took a great silver mine into bankruptcy.

Michael contacted me recently and asked what I thought about a pure silver company, one that only looked for and mined silver. What could I say?

It’s a brilliant idea and I said so. Silver is so cheap relative to anything that I see a bright future for it. Michael has picked up options on two giant silver projects in Chile. He intends to move to a 100,000-ounce gold equivalent production level. Each project has economic silver at today’s price of silver. We are in an era similar to that of 2001 when great silver properties were being given away.

The first, the Challacollo silver project, has a 37 million-ounce high-grade silver historic resource. It measures 200 g/t silver with a 0.31 g/t gold kicker. Terms call for Aftermath Silver Ltd. (AAG.H:TSX.V) to pay the vendor CA$7.5 million with a 3% NSR (net smelter return). That’s about CA$0.20 an ounce or about 1% of the value of the silver in the ground. The property comes with a substantial potential to add ounces. Underground sampling suggests a potential 20 million ounces ignored in the latest resource estimate.

Aftermath’s second shot at becoming a silver mid-tier is called the Cachinal property and has a current NI 43-101 silver resource of just over 22 million ounces. Aftermath is paying a total of $3 million for the project over a three-year period. That works out to about CA$0.15 per ounce of silver.

There is a nearby mill about ten miles distant that is underutilized and would make the resource economic at the current price of silver.

In my experience investors tend to make things way too complicated. They want to hear about Comex defaults and naked short selling and total manipulation before they will pull the trigger and buy. Frankly I find manipulation to be the worse possible reason to invest in anything. But by keeping things simple it’s possible to see opportunity when others don’t.

Silver is cheap. Relative to gold it’s just about as cheap as it has ever been and we know it will regress to the mean because we read my book. You can buy Aftermath when silver in the ground goes back to $1 or so an ounce, but it will be a lot more expensive. Silver is unloved today and that’s the time to buy.

Aftermath needs to get the “.H” removed from its symbol and needs to make some necessary management changes, but the concept of becoming a leading silver producer is both timely and attractive.

Aftermath may well become an advertiser and I know they have a placement planned that I intend to participate in. Please do your own due diligence.