Intel Corporation’s shares declined 2.5% on Wednesday after the chipmaker forecast modest profit growth over the next three years. The company forecast to have just 28% market share by 2023, or about $85 billion in sales in a $300 billion market for the chips it makes. Two weeks earlier the stock fell more than 7% after the company said it expected full year revenue of $69.0 billion, a decline from $70.8 billion in 2018. It would be the company’s first revenue drop since 2015. Stock price tumbled despite the fact that company’s first-quarter earnings exceeded forecasts: $0.89 cents instead of $0.87 per share. Lower revenue estimate is bearish for Intel stock price. 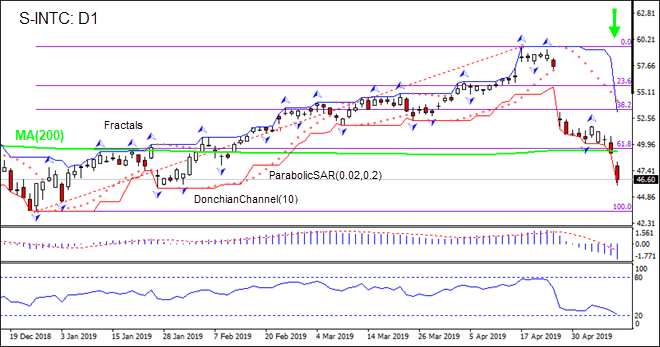 We believe the bearish momentum will continue after the price breaches below the lower boundary of Donchian channel at 46.04. This level can be used as an entry point for placing a pending order to sell. The stop loss can be placed above the fractal high at 51.79. After placing the order, the stop loss is to be moved every day to the next fractal high, following Parabolic signals. Thus, we are changing the expected profit/loss ratio to the breakeven point. If the price meets the stop loss level (51.79) without reaching the order (46.04), we recommend cancelling the order: the market has undergone internal changes which were not taken into account.