Chinese economic data were weak recently: Caixin China manufacturing purchasing managers index dropped to 50.2 in April from 50.8 in March, while Hong Kong’s trade deficit widened to H$59.2 billion in March from H$48.8 billion in February. Mainland China’s factory activity weakened in April but still recorded expansion: a reading above the 50 level indicates an expansion in activity. Hong Kong trade deficit increased by 6.7% in March from H$55.5 billion in the same month of the previous year as exports fell 1.2% while imports declined 0.1%. The downtrend in Honk Kong’s exports is still intact due mainly to declining manufacturing and trade activities in the region, according to state statistics agency. The US-China trade dispute is a downside risk for Hong Kong stock market while there are positive developments: Treasury Secretary Steven Mnuchin and Trade Representative Robert Lighthizer resumed trade negotiations with China, with sides reportedly close to a final deal. 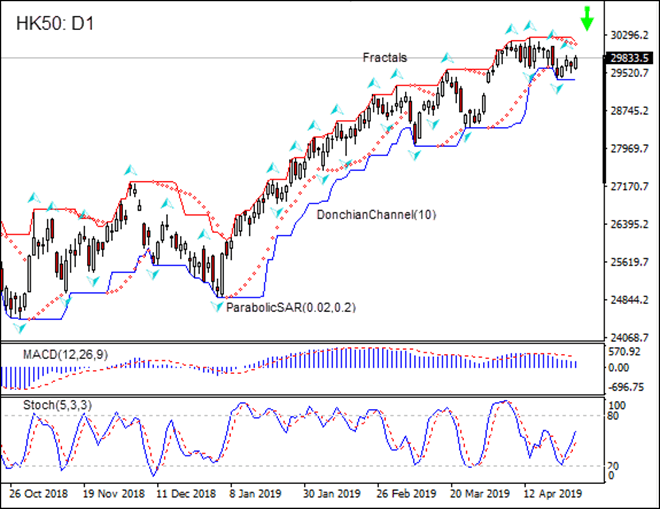 
On the daily timeframe HK50: D1 is retracing after hitting 11-month high in mid-April.

We believe the bearish momentum will continue after the price breaches below the lower Donchian boundary at 29373.5. This level can be used as an entry point for placing a pending order to sell. The stop loss can be placed above the upper Donchian boundary at 30176.5. After placing the pending order the stop loss is to be moved every day to the next fractal high, following Parabolic signals. Thus, we are changing the expected profit/loss ratio to the breakeven point. If the price meets the stop-loss level (30176.5) without reaching the order (29373.5) we recommend cancelling the order: the market sustains internal changes which were not taken into account.

South Africa must get ready for an inevitable loosening of trade ties with the US Jun 4, 2020 - By Mills Soko, University of the Witwatersrand In six months’ time the world’s gaze will be trained on what is gearing up to be a contentious and hotly contested presidential election in the US. Irrespective of who emerges victorious between…