Stocks in Asia eked out gains during early trading even as the S&P500 eased off its six-month high, after disappointing results from Goldman Sachs and Citigroup weighed on risk appetite. Market expectations over this quarterly reporting season being the weakest in three years has left investors wondering how much upside remains for stocks.

For proper context, the S&P500 is still just less than 1 percent away from its record high, while the MSCI Asia Pacific Index has already climbed by some 11 percent so far in 2019. Even as the catalyst to drive risk sentiment over the near-term revolves around the current US earnings season, equity bulls may have to turn their attention elsewhere to find reasons to send stocks higher. With lingering concerns over slowing global growth, US-China trade developments and Brexit among the many other geopolitical risk factors straining sentiment, the options for equity bulls look limited.

PBoC to ease on stimulus?

The People’s Bank of China is singing a different tune compared to the dovish tones coming from major central banks around the world. The PBoC released a statement from its April 12 meeting, saying the Chinese economy “has shown healthy development and economic growth is resilient”.


Such rhetoric frames the expectations surrounding Wednesday’s release of China’s Q1 GDP, industrial output, and retail sales data, as the Yuan remains steady against the US Dollar around the 6.71 handle at the time of writing.

However, markets are also interpreting this confident outlook as reason for the PBoC to withhold more stimulus; the PBoC has previously said it would not “flood” the economy with excessive liquidity. With market sentiment perhaps over-reliant on the potential for more stimulus measures, equity markets have indulged in some profit-taking, with the Shanghai Composite Index some 100 points off its highest level since March 2018.

Gold is on course for testing the $1,280 support level yet again, as the resilient US Dollar makes it harder for the precious metal to hang on to gains.

Broadly, global risk sentiment has been supported by China showing signs of stabilizing and hopes that the US-China trade saga will conclude with a breakthrough deal. However, with the ECB and the IMF warning that risks remain tilted to the downside, markets do not yet have the all-clear for charging into a risk-on side. This alone should provide support for Gold prices at the $1280 floor.

Focusing on the medium to longer-term outlook, Gold remains protected by concerns over slowing global growth, Brexit, geopolitical risks and a dovish Federal Reserve. As long as these themes remain present, the metal still has ample upside potential. 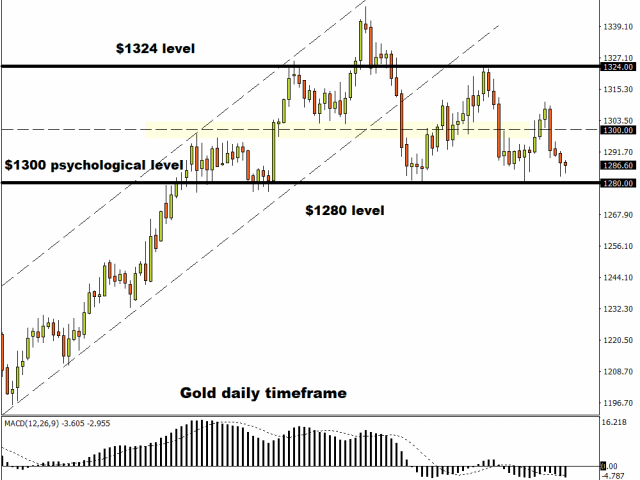