Option/Royalty Generator Features More Than 70 Projects in Western US

This is a very easy and straightforward story to tell. Not only does Ely Gold Royalties Inc. (ELY:TSX.V; ELYGF:OTCQB) have 77 Nevada properties in play but it is already enjoying one royalty and expects a second royalty to start kicking in by June of this year. Without any other revenues, these two properties are expected to generate $1.25 million this year, which will cover all corporate overhead and SG&A. But that’s chump change compared to what I expect this company will earn, as it has royalties on several advanced-stage projects in the hands of solid companies. 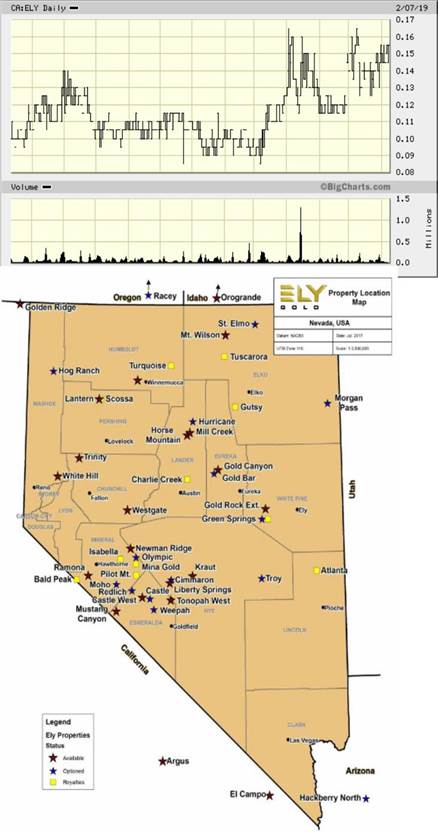 
Of the 74 properties in play, here is a breakdown of their various stages:

The company also has a strong database, which is the key to property transactions, and the database continues to generate new properties and district consolidations. Also impressive to me are some of the well-known mining company partners that working on various projects in Ely’s portfolio, such as Barrick, Coeur Mining (two projects), Hochschild Mining (four projects) and Gold Resource Corp. (four projects).

Ely has also been able to consolidate properties and, as a result, gain royalties on a number of Nevada properties, including the following: Mina Gold, Isabella, County Line, Weepah, Tonapah and Gold Bar. The Isabella Project is being developed by NYSE-traded Gold Resource Corp. and the first royalties are expected to start flowing toward Ely by June of this year. The Gold Bar Project is being developed by one of our current recommendations, namely, Fremont Gold.

With the very large portfolio of companies owned by Ely, it is of course impossible to begin to talk about all of them. But let me point out some of the more advanced projects, beginning with two that are expected to start generating cash flow to Ely this year.

Fenelon Gold Mine, Northern QuebecWhile most all of the company’s focus is on Nevada, last year management purchased a 1% royalty from Balmoral Resources for $500,000 in cash plus 1 million common shares issued at a deemed value of $0.10 per share. The underground mine currently has a small high-grade resource but with mineralization open at depth, exploration will be ongoing as mining proceeds. At present, commercial operating permits are being applied for but the company does have permission for bulk mining of some 35,000 tonnes grading between 18 and 25 g/t gold. Expectations are that some 26,000 ounces of gold will be produced from this bulk mining. A 1% royalty would amount to 260 ounces of gold, which at $1,300 would be worth approximately US$338,000. At current exchange rates, that mounts to around C$450,000, thus returning most of the initial cash investment to acquire this royalty. 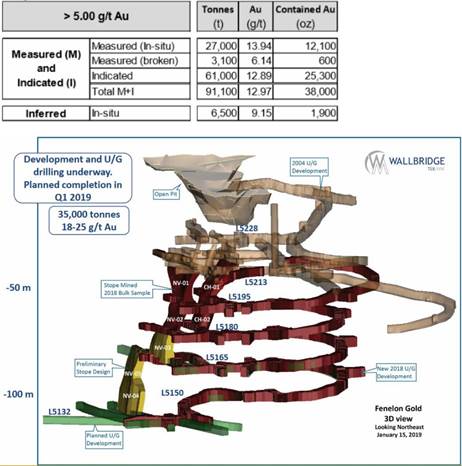 Admittedly, a small-scale mining operation like this may not excite many investors, but as a starter asset, with a high probability of high-grade mineralization extending to depth, this project could provide long-term cash flows that repay the initial investment many times over.

The Fenelon Gold Mine Project is being advanced by Wallbridge Mining, another company that Eric Sprott has a position in. It trades in the U.S. under the symbol WLBMF. It is headed by Marz Kord, a mining engineer with over 30 years of experience in the mining industry, spanning a career over which Mr. Kord has held progressively more responsible roles in both operations and management. During the early part of his career with Falconbridge, Mr. Kord was involved in mining operations in both Sudbury and Timmins.

In 2017 and since acquisition, Wallbridge has completed 33 drill holes totalling 6,348 meters in three surface exploration drilling campaigns at Fenelon (see Wallbridge Press Release dated December 13, 2017). Results from this initial year’s exploration drilling program exceeded expectations and resulted in an expanded exploration target for the area near existing infrastructure and above 150 meters depth. In 2017, some of the high-grade intersections were:

Very little drilling has been carried out below 150 meters and the mineralization remains open to depth and along strike. In addition, drill intersections along the 4-kilometer strike length of the mineralized structure demonstrate potential for new discoveries on the broader property. Wallbridge is immediately targeting 250,000 to 400,000 high-grade ounces at depth. It looks to me as if Ely Gold could receive a very quick payback of its capital and then enjoy a long life of royalties for its shareholders.

On June 19, 2018, the company commenced construction at Isabella Pearl and targets the first gold pour by June 19, 2019. The Isabella Pearl project contains Proven and Probable reserves estimated at 2,694,500 tonnes grading 2.22 grams per tonne, which equates to 192,600 gold ounces based on a feasibility reported dated December 31, 2017. Future production development anticipates two adjacent open pits with the Isabella pit averaging approximately 1 gram per tonne gold with mineral outcropping at the surface, and the Pearl pit averaging approximately 3.7 grams per tonne gold with a higher-grade core averaging nearly 5 grams per tonne gold. The project estimates an average 5:1 strip ratio with metallurgical tests estimating gold recoveries for crushed oxide rock of 81% and run of mine ore (ROM) of 60% using conventional heap leaching. Small amounts of silver are expected in recoveries, which would be treated as by-product credits against gold production costs.

Following is a list of the company’s royalty holdings: 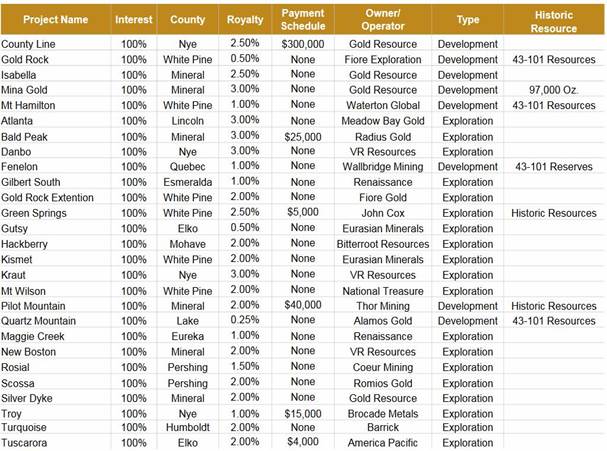 Here are a couple of the more advanced royalty holdings that are being worked on now:

Gold Rock ResourceEly has a 0.50% NSR on this project that is being developed by Fiore Gold. The project consists of a large 20,300-hectare contiguous land package on the Battle Mountain-Eureka Trend, anchored by the former Easy Junior Mine, which reportedly produced approximately 2.6 million tonnes at a grade of 0.89 grams per tonne for 74,945 gold ounces in the early 1990s. The area in and around the former Easy Junior Mine hosts a recently released mineral resource as follows:

Management believes there is an excellent chance to grow the project along strike, both north and south of the former Easy Junior open-pit mine. This is a 200-sq.-kilometer contiguous land package on the Battle Mountain-Eureka Trend.

As noted above, the company has some 21 properties that are optioned to third parties. The options are for 100% and are purchased from Ely for cash payments and/or ongoing option requirements during the time the options are held. Following is a schedule of options held with the schedule of payments coming to the company in 2019 from the current portfolio. 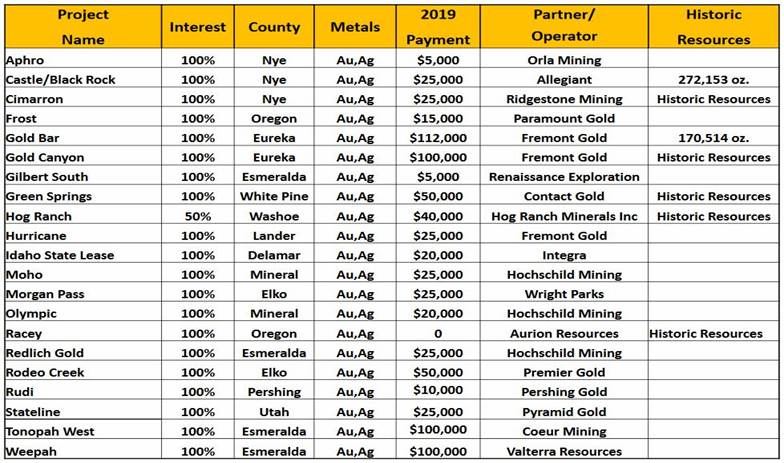 These are options only. Ely has no interest in holding a JV interest. However, they are subject to future royalties payable to Ely and the projects are scalable, meaning that royalty payments in the future can grow as the project and production grow.

A typical option contract lasts for four years with escalating and balloon payments over that time frame. There are no work commitments and data is held open to the public on all properties.

As noted previously, the company has an additional 26 optionable properties available for options.

This company has a large number of projects, most of which are in Nevada. Its business model generates cash now through its sale of options, and its large database allows it to generate new prospects. The one negative at the present time is that there are no really large-scale deposits yet outlined. However, with such a large number of prospective projects hosted in various area of Nevada where elephant-size deposits are known to exist, the potential for one of Ely’s partners to outline something large that could allow this company to develop into something that is meaningfully large would seem to be considerable.

For the time being, as noted above, the company is set to receive at least $1.25 million in 2019, which will cover all overhead while work continues on several exploration targets. Compared to its peers, this company carries a very low valuation. I see very little downside compared to upside at a time when growth should really start to accelerate first from developing projects and longer term from the pipeline. If you find this story of interest, you may wish to view the presentation here, made on behalf of Ely Gold at the January 2019 Metals Investor forum.

As he followed the demolition of the U.S. gold standard and the rapid rise in the national debt, Jay Taylor’s interest in U.S. monetary and fiscal policy grew, particularly as it related to gold. He began publishing North American Gold Mining Stocks in 1981. In 1997, he decided to pursue his avocation as a new full-time careerincluding publication of his weekly J. Taylor’s Gold, Energy & Tech Stocks newsletter. He also has a radio program, “Turning Hard Times Into Good Times.”


Charts and graphics provided by the author.

J Taylor’s Gold, Energy & Tech Stocks (JTGETS), is published monthly as a copyright publication of Taylor Hard Money Advisors, Inc. (THMA), Tel.: (718) 457-1426. Website: www.miningstocks.com. THMA provides investment ideas solely on a paid subscription basis. Companies are selected for presentation in JTGETS strictly on their merits as perceived by THMA. No fee is charged to the company for inclusion. The currency used in this publication is the U.S. dollar unless otherwise noted. The material contained herein is solely for information purposes. Readers are encouraged to conduct their own research and due diligence, and/or obtain professional advice. The information contained herein is based on sources, which the publisher believes to be reliable, but is not guaranteed to be accurate, and does not purport to be a complete statement or summary of the available information. Any opinions expressed are subject to change without notice. The editor, his family and associates and THMA are not responsible for errors or omissions. They may from time to time have a position in the securities of the companies mentioned herein. No statement or expression of any opinions contained in this report constitutes an offer to buy or sell the shares of the company mentioned above. Under copyright law, and upon their request companies mentioned in JTGETS, from time to time pay THMA a fee of $250 to $500 per page for the right to reprint articles that are otherwise restricted solely for the benefit of paid subscribers to JTGETS.

Metals Opinions
← Should We Rethink Nuclear Power?
U.S. Biotech Makes ‘The Acquisition We Were Waiting For’ →
Featured Articles: