The previous sense of market euphoria created by the U.S.-China trade truce news last weekend now risks being completely overshadowed by a range of Tweets fired by President Trump yesterday on his social feed.

This has encouraged uncertainty to emerge over the conviction from the U.S. administration over the trade truce and whether a resolution to this long-standing issue will be found. Confusion and uncertainty over what is happening coupled with renewed concerns about the likelihood of slowing global growth has switched the market sentiment creating a poor mood for stocks. Investors are becoming increasingly doubtful over Washington and Beijing securing a deal within the 90-day window, given the sheer lack of detail and conflicting accounts over what both sides actually agreed on.

The tremors created from President Trump’s Twitter outbursts continue to illustrate how financial markets remain extremely sensitive to trade-related newsflow. With Trump warning China via Twitter and stating that America is going to have a “real deal” or “no deal at all” just days after talks, one can’t help but feel a sense of déjà vu that Trump is going to return to his public hard-line stance. Although the Trump Administration has repeatedly blamed the Federal Reserve’s monetary policy tightening for the unfavourable investor mood in stocks, the key culprit behind the selloff witnessed yesterday was clearly the comment made by Trump on trade with China.

Market players who were cautiously optimistic over trade tensions easing are losing patience and this continues to be reflected across global equity markets. Asia closed mostly lower this morning following steep losses on Wall Street overnight. The negative sentiment from Asia has already infected European markets and is seen trickling back down to Wall Street this afternoon.


Sterling braces for another rough session

Investors with an interest in the Pound should securely fasten their seatbelts and safety helmets for a volatile ride ahead of the Parliamentary vote on Brexit next week.

The British Pound was an easy target for sellers yesterday after Theresa May’s government was found in contempt of Parliament for refusing to release key Brexit papers. May’s triple defeats in Parliament are highly discouraging and may intensify fears over her Brexit deal being rejected next week. With every day in the political arena shaping up to be a terrible day for Theresa May, this is poised to weigh heavily on the British Pound.

In regards to the technical picture, the GBPUSD fulfils the prerequisites of a bearish trend on the weekly charts as there have been consistently lower lows and lower highs. A solid breakdown and weekly close under 1.2700 should instil bears with enough inspiration to target 1.2590. 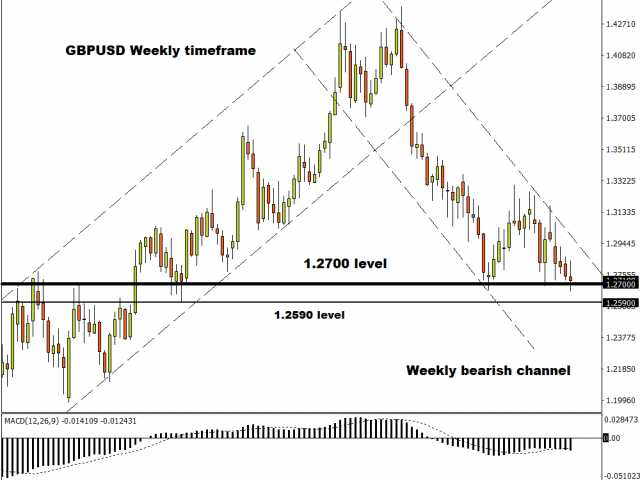 The past few trading weeks have been quite rough for Oil prices amid supply and demand side factors. With Oil finding comfort at such depressed levels, expectations remain elevated over OPEC+ cutting production by roughly over one million barrels per day in an effort to stabilize markets. While a production cut from OPEC+ is seen pushing Oil prices higher in the near term, the medium- to long-term impact remains open to question. Rising production from U.S. Shale, lingering fears of global oversupply and threat of slowing growth hitting demand remain core themes that will continue weighing on Oil markets.

The near-term outlook for WTI Oil will depend on the outcome of tomorrows OPEC meeting. A production cut in line with market expectations is seen pushing WTI Oil back towards $55. Alternatively, if OPEC decides to leave production unchanged, prices are seen sinking back towards $50 as investors exploit oversupply fears to attack.

Economics & Fundamentals Financial News
← The Analytical Overview of the Main Currency Pairs on 2018.12.05
The Major Currencies Are Showing a Variety of Trends →
Featured Articles: